This 2-player LARP is about kissing and being queer and resisting fascism. Love cannot always conquer all, but it is better to be with the people you love than to let them win. PUNCH NAZIS

Use enthusiastic consent when playing this game, and make sure to look out for your own emotions and the emotions of other players.

i sexually identify as a car

Hey u should buy this game, specially if it is for a bundle! LET FASCISTS DIE MAD WHILE LGBTQIA+ MEDIA THRIVES. Also report any alt right trolls in this comment section plz.

just to piss off fascists, i'll enjoy the heck out of this game
10/10

I haven't played this, but as a non-binary queer, this HAS to be great!

This is so gay! Im absolutely going to play this with my partner

this is absolutely great

This is very nice and good!

This qualifies as a game?

Yep! It's a lyric game, which is a style of emotional and poetic role playing game. Also as a LARP, this game is about fully embodied play (which is even more expanded upon with the lyrical concepts of no seperation between character and player).

I got this game with the racial injustice bundle a few months back, and I've been trying to sift through the 1,700 different games and other artworks and try to narrow it down to the dozen or so games that really resonated with me. I saw this one, quickly read the entire 200 word ruleset, and moved on. I'm not gay, I've got 1,699 other games to look through, and I can't even imagine an scenario where I'd actually get to play this game, so it probably just isn't for me. But for some reason, a few days or a week later, I still think about it a bit, and I think I've figured out why.

I've read people in these comments argue about whether or not it's a game, I'll suppose because the rules are brief and there is no "win" condition and yada yada. At least, I hope those are the only reasons. I doubt they are though.

However, the schoolyard game "Tag" is still a game, despite its brief rules, no win condition, yada yada. And like the game Tag, this is one of the most blunt games I've ever seen. If games are art, and art is a reflection of the artist, then this game could not make the intentions of the artist clearer. With so few rules and distractions in the game of Tag, it becomes really obvious what the intention of the game is: To run around with other kids and have fun. Similarly, this game's tiny ruleset and brevity makes it abundantly clear what the author's intention is:

This isn't to call this game childish, or on the same emotional level with a game of Tag, but more so to point out that both are games in a similar way: Their simplicity allows them to wear their hearts on their sleeves. This game doesn't need any more than 200 words for the author to tell me exactly what they want, and that thing they want is so simple and poignant that it's almost impossible not to empathize. I think that's why I love it.

Thanks for the great game, hope you make many more in the future!

This was a lovely review, thanks! I appreciate you so clearly understanding and outlining what I'm going for. I'll admit you had me concerned at the beginning hahaha

Is this "game" some sort of joke? Am I missing something?

yes, yes it is a joke. i think you are missing something

The creator says it's not

yeah you are missing something. this game exists in a genre of other queer intimacy games, and is not a joke. This isn't a tabletop game about an adventure, and you don't play a character. Think of it like emotional tag. I want people to play this game, discuss their issues, get some validation, and maybe smooch at the end.

As a game designer, by reading the "rules" I'm not even sure it can be considered a game in the first place tbh.  When I asked if I was missing something is simply because it felt to me like it's  some sort of joke, I was wondering if it was made seriously or not, not because I was confused about the concept. (Just in case and since the only negative comment I saw was removed, gay gnc man here so it's not phobia or anything)

It's okay. The debate on what is and isn't a game is a long one, but suffice it to say this is a game. Expand your definition of game. I'd encourage you to learn more about the lyric games and other experimental games movements which are very active here on itch.

A amazing game of queer love in the face of fascism and just shows well a skilled designer can do so much with 200 words.

A goddamn delight is what this game is. Also, more emotional than I expected, in a very good way.

this is motherfucking fantastic anybody who thinks otherwise can suck my dick.

What were your thoughts on tweaking it?

Is this the Antifa training manual?

it was infact a part of the Antifa game jam:
https://itch.io/jam/antifa-game-jam/entries

I have definitely played this game in spirit before I knew it existed. Would play and would buy again. In the words of the sages of our age, "Be Gay, Do Crimes" <3

this bundle has some interesting inclusions, Honestly I espescially love the marketing on this game

Are there more screenshots?

It's a single-page game in pdf format, so a great way to see a screenshot is to just open the pdf!

One of the most compelling works of interactive media, if not all artistic expression itself, of our contemporary times.

yeah I'm sure that the game with the thumbnail BE GAY, DO CRIMES is helping this anti-police brutality bundle sell.

it definitely contributed to my purchase.

Literally the reason I bought it.

actually yeah it made me buy this entire bundle

The people who say they bought the bundle because of it, I don't know how to tell you this, but... the game's free.

This game is the whole reason I spent $50 on this bundle. And I only noticed the game because of it's charming thumbnail.

Hi there! I'm going to make the assumption you're bringing this up in good faith. If you take a read through the game, you'll notice that it's about how being LGBTQ+ has a history of being criminalized, and is criminal in many places still today. It's about loving your queer love, despite it being a crime. This game suggests "be gay do crimes" precisely because being gay is a crime itself. It's a great inclusion in this bundle, one could argue, because it points out that not all laws are just, and not all "crimes" should be considered crimes. I hope that helps you understand a bit better, have a nice day!

Yeah, I'm sorry about being judgey. I merely thought it was out of place in an anti police bundle since perceived crime and later escalation is what got george floyd killed. I made my observation without being clear and I deserve to be downvoted for it. Even if your game's free including it means the bundle as a whole appeals to a wider audience. I guess I shouldn't judge a book by it's cover (literally-ish.).

I'm sure your comments are all in good faith and you will not misrepresent reality in a twisted and slightly disgusting way.

Well, in that case I concede my case and agree with you.

Escalation? All Floyd did was have an anxiety attack and fall down.

The original meaning of "gay" was "happy / merry" (as in "make the Yuletide gay!"). Only in recent times has it changed to refer to a person who is homosexual. "Be happy, commit crimes" kind of makes sense though. :-) Speaking of trivia, "queer" also had another meaning long ago.

The bundle made over $8 million spread out across 814k people . Somehow I don't think it had any trouble selling.

I like that game. I would like to print it and give away on a festival. So I ask for permission... :D 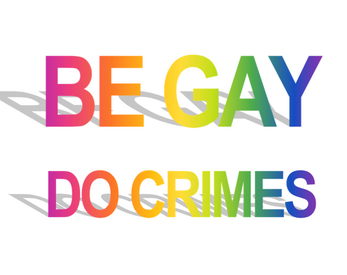