Tension is a Tarot based roleplaying game for telling stories like Killing Eve and Hannibal, letting you explore queer experiences in the cat and mouse genre.

Play as an investigator and a killer as they get entangled in each other. You will pursue after another back and forth while everyone in your orbit drops like flies. But it’ll all be worth it, because you’ll be in love. Or dead. Or both maybe? How exciting!

Up to three players will create a full cast of 22 characters, one for each of the Major Arcana. In Tension everyone has a hand of tarot cards they play over a series of scenes, revealing twists and turns as the story progresses between the two main characters. Players might be triggering mood shifts, activating character specific actions, introducing orbiting characters, or even killing people off.

Tension is a "gm-full" game as opposed to "gm-less," with all players involved taking active stock in the progression of the story and the actions of the each of the characters. Players are encouraged to move between actor and director stance fluidly.

When playing with two players, one inhabits the investigator and the other the killer, stepping in to inhabit the orbiting minor characters as the scene calls for. In the three player variant, one player is the Ensemble. They guide the orbiting characters and amp up the drama, able to twist the emotional knife with the two main characters from their outside perspective.

Tension is not a mystery, it’s a dark comedy thriller romance. The killer and the investigator know who the other is, yet they are still inexplicably drawn together.  Hijinks and drama ensue as they are trapped in a complicated web of attraction, lies, and even truth.

Tension can tell tight one shot stories over a few hours, or it can tell a longer season of multiple episodes strung together. Characters might be revealed to have miraculously survived, loyalties can shift, and slow burn secrets can reveal themselves. Whether you just want a single night of fun or weeks of emotional exploration, Tension delivers.

Art and Layout by Francita Soto

In order to download this game you must purchase it at or above the minimum price of $15 USD. You will get access to the following files:

Each copy of this game you buy at $20 donates a copy to someone else for free! If you are unable to purchase it at this time, please claim one of these free copies for the community. If no more community copies exist and you wish to claim one for any reason, please DM @adiraslattery on Twitter.

Several members of the cast of Moon Harbor Heroes played Tension for a recent issue and it was incredible. The push and pull of the narrative fits the cat and mouse mechanic so well and the tarot deck feels like an appropriately sacred way to tell what ultimately is a fairly intense story. There were definitely moments of levity, but it felt like circled back to, as the name implies, tension, both sexually and narratively. There is the tension in the world at large and then also tension between the two characters. It was nail biting at times, hilarious at others, and just so so gay. Check out the alpha and preorder the rest; you won’t regret it.

Tension is, per its own description, a "queer cat and mouse romp for two." 'Romp' is getting maybe a non-standard usage here, as the game tends to involve really rather a lot of murder and the themes that it treats with can get quite dark.

The PDF is 24 pages, with a very clean, readable layout and a few small graphics. It didn't feel like it was hurt by its lack of illustrations, but they might have helped to anchor the game's mood and tone even more.

Speaking of which, Tension takes Hannibal and Killing Eve as reference points, so its mood and tone are complex. It's a macabre romance, or a gothic tragedy, or an upbeat slasher flick, depending on how you look at it.

Structurally, Tension is tight. Every scene drives the two main characters together, and every scene forces them to think about what they're doing and why they can't stop. The game opens with a chance encounter, and it closes with a point of no return, and this format launches the players like a projectile towards the end.

The PCs aren't alone in the setting either. Both characters also have orbits--members of the supporting cast that are connected to them. Orbits have built-in connections to the main characters and come with compelling hooks, but their main purpose is to die.

Mechanics-wise, Tension uses a deck of Tarot cards to shape each scene. Both players have a hand of five cards, and can play them for various effects. Minor arcana are mood beats. Major arcana introduce orbits. Anyone can discard a card to kill an orbit, even if they're not in the scene, and both players have a list of things they can uniquely do by discarding a card.

The players' unique actions are extremely interesting and in-genre, and can be anything from ret-conning the scene into a dream sequence (although mechanically this doesn't un-kill orbits) to solving problems that have been introduced into the narrative. Uncomplicating the characters' lives is as easy as playing a card, but the characters don't *want* their lives to be uncomplicated. Their messy attraction keeps driving them together.

Because of the way gameplay flows in Tension, "scene" doesn't quite feel like the right word to encapsulate ten cards' worth of action. Confined to one place at one time, ten cards might make for a very cluttered environment. "Episode" fits better, and each session of nine scenes feels like it's basically a season of a show.

For player tools, Tension includes a quick reference, a rundown of safety mechanics, and really clear, direct writing to make it easy to pick up.

Overall, Tension is a cool game made well. It's very not for me (I legitimately struggle to comprehend the level of hotness it would take to let serial-killing fly in a relationship), but if you *do* like the material it's based on, I think you'll have a really good time with it.

Theoretically, Tension is also reworkable with a few tweaks, so if the serial killer bit is a deal-breaker, you could have the killer be a rebel or a monster or something else that's innately transgressive instead.

Thank you so much for this review!!!

Thank you for writing Tension! 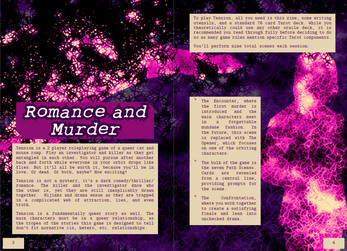 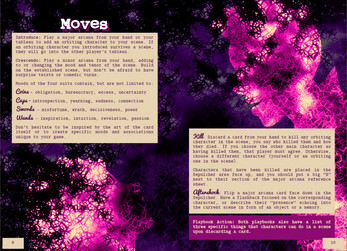