The curse snuck up on you, and now you can’t escape. You’re not sure how or when it began, but every waking moment, you feel the machine call to you.

Behind its words are music, beckoning you to build. The impossible notes echo in your mind, and you know what you must do. You can see it now, this manifold instrument.

You will complete this infernal machine or die trying. 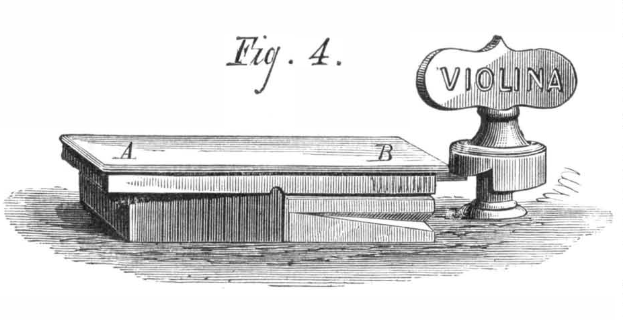 A serial journal roleplaying game for as many players as you wish by Adira Slattery and Fen Slattery. Gameplay happens across days, weeks, or even months. Only one person plays this game at a time, but many people play it in sequence.

To play this game, you will need a small, lightweight notebook that is easy and inexpensive to mail. As part of play, you will mail this notebook and the pamphlet containing the game rules to the next player. You will also need a deck of standard playing cards; these are not passed between players.

This game is inspired by our love for Martin Molin and his Marble Machine X construction process. We recommend his visit to the Speelklok Museum for inspiration.

This game has themes of inevitable death, obsession, mental illness, physical and emotional self-harm, isolation, depression, fixation, and futility that might be difficult for some players.

In order to download this game you must purchase it at or above the minimum price of $5 USD. You will get access to the following files:

Each copy of this game you buy donates a copy to someone else for free! If you are unable to purchase it at this time, please claim one of these free copies for the community. If no more community copies exist and you wish to claim one because you are experiencing hardship, please DM @adiraslattery on Twitter.

I really loved the game <3 i just bought it and translated it to portuguese so i can play with my friends here in Brazil, and i would like to donate the translated version to support the game, so you can sell it for portuguese speakers too. And it's good translation. Not google translation. hahahaha. How can i send it to you?

I'm from Brazil, too! Been considering buying this game for a few weeks now

I'm totally in love with this game, I'm a fountain pen lover and every morning during breakfast I draw a card and write some story. I've got a question: after the third ace or face card the downfall occours in this event or the event is completed and the next one will be my downfall? (it's a mere curiosity, I'm a "follow-the-rules" fan :))

Glad you're enjoying it!!

Rules as written it would happen with the next entry to give you a little time to set it up, but there's no reason that you couldn't do it in that same entry. That is now an official "alternate rule" :P

Great, thanks for the answer!! I've always ended up on the "event after the third skull event" but with the actual story I will do a sudden ending!! Thanks a lot! :D

I'm really excited to play this with my brother!  I have two questions before we start.

1) Do you think a Tarot deck would work instead of a deck of playing cards? I wanted to make sure there is no game mechanic that I'm overlooking before trying this idea. Keep in mind a deck of cards has 52 vs the 78 in a traditional tarot deck.

I'm thinking of using the themes outline in each minor arcana card instead of the suit themes listed in the rules. They are also accompanied by a number, ace, and face card so it can keep in line with the mechanic of what  type of event happens. I think the only issue is with the major arcana (The Fool, Death, the Tower, etc) as they don't follow the playing card deck layout. Perhaps those can be ignored or maybe those can be an unrelated entry of the person's life instead of the machine.

2) Is the physical characteristics of the machine different on each handoff? I imagine there are details left in the journal of what the machine looks like from the previous player but do we need to keep that continuity?

1. Yeah, you could probably hack it to make a Tarot deck work sure!

2. That is up to whoever is writing the entry! Some games have had the machine be very similar each time, with one person building on the work of the previous, and others have had a variety of machines but all still coming from the central obsession that the game revolves around.

Hi there Adira! I recently bought The Machine and am currently preparing to play it with some of my friends, but we have a question that I feel needs to be answered; is it possible for any of the characters to finish the machine, or would that ruin the premise of it?

So when Fen and I were writing the game, the continual downfall and failure was incredibly important to us. If you decide together with your friends to tell a different story though please let us know how it goes!! Someone finishing the machine is a wildly different game for that player in particular.

I found this game via a mention on youtube from the folks on Dicebreaker. They supplied alink and I came on over and purchased a copy.

I also found a random card generator on line and sat down and gave the game a whirl. I am reporting...LOVED IT! Thanks for such a creative way to get the imagination going.

I have passed on the journal to a friend of mine as I drew three face cards in the first 8 days! Yeah crazy bad luck...

Glad you had fun!!

Is this a game that one could play alone? Or is it something that has to be passed on? I don't know anyone who does creative writing, but I love this idea and think it would make a fantastic writing prompt/series sort of thing to get my muse going. I just want to make sure it's something I could actually use before scraping the money up for it.

Yeah you could definitely play it alone! You can "pass" the journal to a new character, making it a series just with yourself

Awesome! thank you so much! I'll def start saving what i can then, this looks like a fantastic spiral into madness that can really get the muse a churning. :D

Found out about this last night, and was immediately drawn into it!

Similar to someone else, I have decided to start a post thread about my story! Rather than passing the journal along, I am going to create new characters for each pass time.

I have created a quick site that will document the journal of the Machine! Check it here

I also have a twitter I plan to use to promote and any help would be greatly appreciated!  Machine Twitter

I've started the journey into the machine.

I enjoy the new media, so instead of starting and passing on a notebook, I'm doing a mixed media version on Insta 😊

Available to whoever can decipher the handwriting at https://www.instagram.com/makingthemachine/

Excited to get started!

Is there a subreddit for The Machine or something similar? I would love to actually trade a journal with someone but I'm the only person I know whose into creative writing like this

There isn't one, but you could consider making a thread on the tabletop games community forums here on itch!

Do you think this could work as a shared Google Doc or file on a USB or would that damage the feel or tone too much?  I only ask as my penmanship is so uttery dire (and a likely fellow player's is even worse) that, componded by my dislexia, people have had trouble telling that I wrote in English, no joke.

Needing to change the game for accessibility reasons is always okay. A file on a USB drive sounds lovely, or you could even print out pages and staple them together. Maybe with a typewriter font haha

Hey, I love this! Just a bit curious, what format would you recommend for the journal and the pamphlet? A5? A4?

A4 should work for the pamphlet, it was designed with American 8.5×11 in mind but that's the closest size. The size of the journal is based on how you plan to pass it from player to player, as a large one would make it hard to mail. A5 sounds great to me!

Thanks! It's what I ended up going with.

Would you consider producing an A4 version of the pamphlet? The aspect ratio of 8.5×11 is slightly different, and I'd love to be able to print it without a margin so that I can fold it without taking scissors to the printout.

Hi! I hope you don't mind a couple of questions...

Thanks! Can't wait to start!

2. Diagrams are not required, but definitely on theme!! 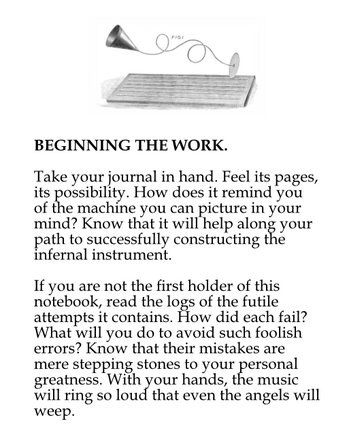 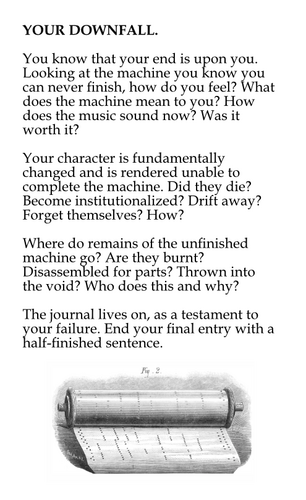