Humanity ventured into space, slowly finding it was alone in the universe...

Until they came from behind physics, and THEY CAME TO PLAY BALL.

They Came To Play Ball is a cosmic horror sports game created using the Firebrands Framework, with touchstones like the movie Space Jam, the cultural event Blaseball, the web fiction 17776, and the LARP Beastfucker. Playtested extensively at Big Bad Con 2019, this game is a labor of love for anyone who has ever felt monstrous.

In this game, you play athletes touched by the eldritch energies of the Void Beyond who are all competing on Athabasus Station in The Tournament of Bells. You belong to one of the five teams residing within Riot City, fighting and falling in love on the pitch.

The Auroras: Holding the most Tournament titles of any team, the shining knights of the Auroras plan to soar over the competition.

The Blue Skulls: Aquatic and serious, the grim Blue Skulls have been long time attendees to the Tournament of Bells. They have never won the title. Ever.

The Roughnecks: First timers to the tournament, the Roughnecks are here to have a rip roaring good time. And maybe crack a few skulls, that’s always fun.

The Gargoyles: The unrelenting fury of The Gargoyles is only matched by how much they love their fuzzy widdle beasts.

The Hellions: Burning their way across the pitch, the Hellions are cunning, crafty, and will do whatever it takes to win. All with a smile.

This game has no GM, and works best with 3 to 5 players, each controlling a member of one of the teams. Each player just needs a copy of the zine and some tokens.

Game and Layout by Adira Slattery

The Firebrands Framework by Meguey Baker and D. Vincent Baker

In order to download this game you must purchase it at or above the minimum price of $10 USD. You will get access to the following files:

Each copy of They Came To Play Ball you buy donates a copy to someone else for free! If you are unable to purchase it at this time, please claim one of these free copies for the community.

Played this game with some pals the other day and we came up with a new couple dynamic: are you the glow in the dark fairy or the big gay rock? Seriously this game is fantastic and I 10/10 recommend it.

They Came To Play Ball is a really fun and imaginative game that truly captures what it means to be an Antiball player on Athabasus Station. Really takes me back to when I would sit in front of our video-graph and root for my favorite team (Go Roughnecks!) and see Amit the Forever Forward go for the net with such ferocity, never giving up!! If you're looking to really capture what it means to play the high stakes drama and passion that goes into Antiball, this one here is THE game for you!

They Came To Play Ball is an excellent Firebrands game, Adira Slattery really knows this framework and shows her prowess here. Small additions like having tokens that are bid and lost and gained throughout are really welcome to the formula that's easy to manage and understand, a great extrapolation if you've played The King is Dead! It plays on the field of being a fast and fun sports team/culture game with it's raucous Antiball Matches to it's Press Releases and also a still beautifully intimate game of growing rivals and relationships that bloom on and off the field. In the game I played I was just as excited to have been called for dinner by the star of an opposing Hellions as playing the game itself!

And all of this is to say nothing on just how wonderful the setting is, and how dripping in evocative juices you want to extrapolate on. The Eldritch Sci-Fi aesthetic is so wonderful, mixing what could be drab and horrific with bombastic and ritualistic. It's truly wonderful. Antiball itself is pretty amorphous and based on several real sports so you can really let yourself go wild even if you aren't a "sports fan." I grew up in Jersey where you can't not have opinions on Football even if you don't know anything but the teams, I will always be a die hard Giants fan, and They Came To Play Ball lets me be passionate about what I love about sports, the idea of them!

This game was released during the explosion of Blaseball, but I got to play it a few months ago and when blaseball started my immediate thought was "OH SHIT IT'S JUST THEY CAME TO PLAY BALL!!!" so if you're here because of that, this is the game for you and your friends. You won't regret it! 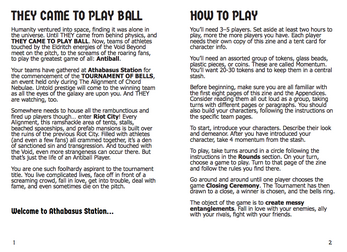 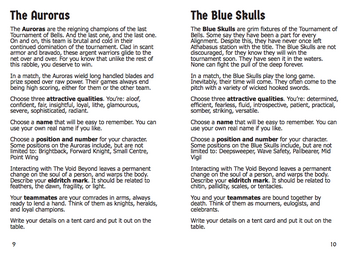 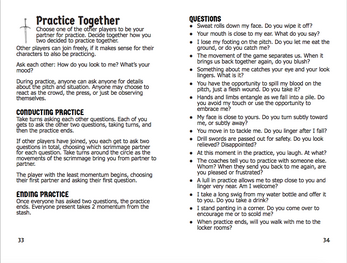